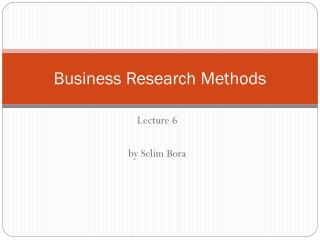 Business Research Methods Lecture 6 by Selim Bora Graphs The distribution of a variable tells us what values it takes and how often it takes these values. To see what data say, start with graphs. Pie chart and bar graphs are two illustrative types.

Business Research Methods - . lecture 3. accessing and reviewing literature as part of research. lecture outline: why is

Business Research Methods William G. Zikmund - . chapter 15: questionnaire design. “it is not every question that

Chapter One RESEARCH IN BUSINESS - . what is business research?. a systematic inquiry whose objective is to provide