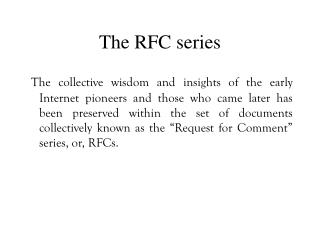 The RFC series. The collective wisdom and insights of the early Internet pioneers and those who came later has been preserved within the set of documents collectively known as the “Request for Comment” series, or, RFCs. RFCs. Seapoint RFC - . ulster bank league division 2a. our goals. seapoint as an ail division 1a club maintain and build our

Kenilworth RFC - . full survey results results of the “where are we heading?” online club survey, march-april 2013.

Selective Repeat (SR) ACK Scheme – RFC 1072 rfc-editor/rfc/rfc1072.txt - The sack option does not change the meaning of

The Teddington RFC Investment Bond - . the rugby club has been authorised to create up to thirty ‘2% fixed rate