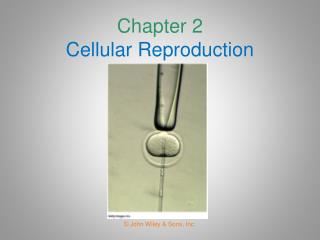 Cell Cycle and Cellular Reproduction - . mader -chapter 9… and some extra stuff. essential knowledge 3.a.2: in

Chapter 10: Cell Reproduction Mitosis and Meiosis - . what would happen to a cell if it continued to grow?. calculate the

Chapter 2 GBBE Part III Cell Division by Meiosis : The Basis of Sex - . objections of this section: meiosis vs. mitosis

CELL REPRODUCTION - . unit target: observe how the structure and function of organisms change as they grow and develop.

Chromosomes, the Cell Cycle, and Cell Division - . systems of cell reproduction. the continuity of life is based on the

Cell Reproduction - . cell division. why do cells need to divide?. it depends on the organism unicellular organisms like

Cellular Reproduction - . a brief history of genetics before mendel major discoveries circa world war i history of

Chapter 2: The Cell in Action - . sections 1-3 pages 32-49. diffusion. the movement from areas of high concentration

Growth and Cell Reproduction - - . growth is a characteristic of all living things. you started out as a single cell.

Reproduction of Cells - . the processes of cell division --- mitosis and meiosis. cell size review…. what are some of

Cellular Reproduction - . cell division - a process in which a cell divides into 2 or more cells. functions of cell