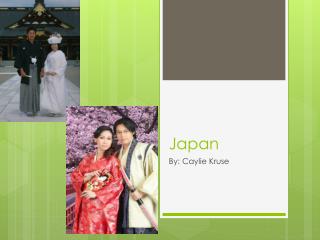 Japan. By: Caylie Kruse. About Japan. Japan is a large country in the Pacific Ocean. It is part of Asia, with a population of 127,817,277. The two major religions of Japan are Shinto and Buddhism. Japan consists of four main larger islands and more than 4000 smaller islands. Customs.