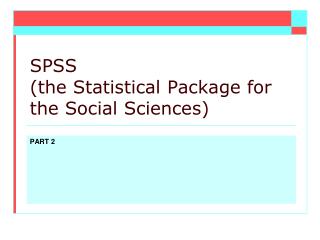 SPSS (the Statistical Package for the Social Sciences) SPSS (the Statistical Package for the Social Sciences)

SPSS - . recently it has gone through a name change so your icon on your computer may be under a different name (i.e.

Statistical Software Packages: - . how do i get this into that ? gillian byrne memorial university of newfoundland. the

Survey of Library Collections Use by Faculty - . in the humanities and social sciences at the university of georgia. nan