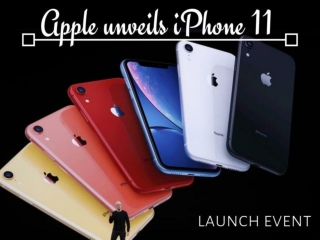 Apple reveals the iPhone 11, streaming services and other products at its annual event, as the tech giant reaches a turning point where it focuses as much on services as its hardware and software. APPLE TO LAUNCH NEW IPHONE TODAY AT 10.30 PM: WATCH THE LIVE EVENT TODAY - The day you were waiting for is here. apple is

It’s Official: Apple To Launch IPhone 11 On 10th September - The date for the next big launch is now certain, 10th

Apple 'iPhone SE' Event as it Happened - Apple march 2016 launch event as it happened: we got to see new iphone se, 9.7in

Apple iPhone 11 Pro Price in India, Specifications, Launch Date, and Reviews - Apple is again back with its new series of

The Apple iPhone - . dr. hayden so department of electrical and electronic engineering 26 sep, 2008. once upon a