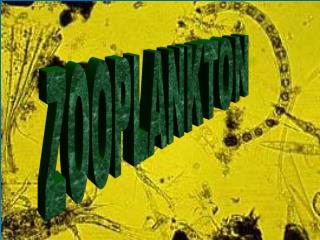 ZOOPLANKTON. All of the major phyla of animals are represented in the plankton. Remember: In the sea, microscopic plantlike organisms form the base of the food chain. This means most of the organisms that feed on these plant like organisms are also small.

Census of Marine Zooplankton - . cmarz is a proposed new field project of the census of marine life to address the

Zooplankton: who are they? - . protozoans (protists) : include heterotrophic nanoflagellates (“hnfs”) 1- 20 m m, eat

Zooplankton - . amal almuhana 2012. introduction . it is the microscopic drifting animal component of planktons in the

ZOOPLANKTON - . usgs. zooplankton are the primary consumers, called heterotrophic herbivores, in food webs. they are the

Plankton - . plankton is composed of phytoplankton (the plants of the sea) and zooplankton which are typically the tiny

Zooplankton - . zooplankton. planktonic animals can be found in almost all animal phyla most zooplankton belong to 3

Vertical Distribution and Migration of Zooplankton - . stephen m. bollens school of biological sciences, and school of

l.stemmann.free.fr - Zooplankton and particle interactions in the mesopelagic layers of the ocean: impact on biological