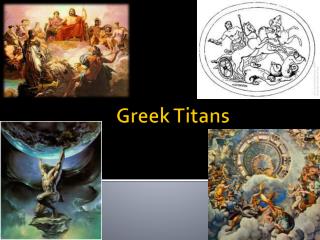 The Titans - A list all of all the titans (and some other powerful deities)of greek mythology. the titans. the titans in

Greek Mythology - . greek mythology is a group of traditional tales told by the ancient greeks about the deeds of gods

Greek Mythology - . an introduction. what are the characteristics of a myth?. a traditional or ancient story originally

Greek Mythology Series: - The rise of zeus [road to the titanomachy] 20 slide presentation an original &amp;

CRONUS Titan - . greek mythology. about cronus. cronus was the ruling titan; the head of all titans. known as the god of

The Creation of the Titans and the Gods - . gaea and uranus. creation, according to the greeks, moves from a

Greek Mythology - . and the modern world. mythology in business. hundreds of companies take their name, logo, or slogans

Cronus - The new god of the gods. cronus. how did cronus become the ruler of heaven and earth? killed his father uranus

Greek Mythology - . miss griffin 12 grade english- introduction to the iliad and the odyssey get to know the greek gods

Greek mythology… - . presented by gerardo diaz,. the beginning of

The Titans - . by jacob bostic. the 12 titans . gaea . the earth mother. kronos. cronus, god of time and of the ages.