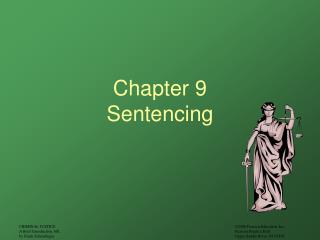 Chapter 16 Sentencing - . this chapter examines the sentencing process including: prohibitions against cruel and unusual

Chapter 15 Sentencing Options - . questions. why do we sentence? should the punishment fit the crime? or, should the

Chapter 9 Trial Courts: Bargaining and Sentencing in Criminal Courts - Most criminal cases do not result in a trial, so

Sentencing - The purpose, the process, and the resulting inconsistencies. sentencing. the purpose of sentencing.

Sentencing - . purpose:. to contribute, along with crime prevention initiatives, to respect for the law and the

Sentencing: - . once guilt has been determined, the next step is to decide what to do to the offender what should

Sentencing - . sentencing—the imposition of a criminal sanction by a judicial authority. most sentencing decisions