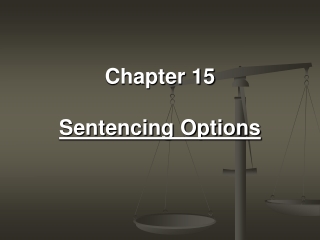 Sentencing Options - . section 38. there are principles that must be considered when young people are sentenced. the main

Sentencing Options - . types of sentencing. sentencing does not always mean imprisonment. due to the high cost of

Chapter 16 Sentencing - . this chapter examines the sentencing process including: prohibitions against cruel and unusual

Chapter 15: Options and Contingent Claims - . objective to show how the law of one price may be used to derive prices of

Sentencing - The purpose, the process, and the resulting inconsistencies. sentencing. the purpose of sentencing.

Sentencing - . purpose:. to contribute, along with crime prevention initiatives, to respect for the law and the