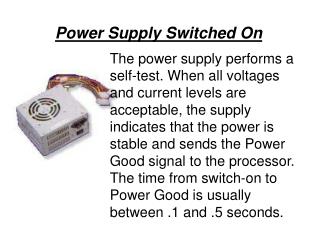 Power Supply Switched On. The power supply performs a self-test. When all voltages and current levels are acceptable, the supply indicates that the power is stable and sends the Power Good signal to the processor. The time from switch-on to Power Good is usually between .1 and .5 seconds.

Chapter Twenty-Three - . industry supply 行业供给. supply from a competitive industry. how are the supply decisions

CHAPTER 5 The Supply Chain Management Concept - . learning objectives. to learn about supply chains and their management

How To Test A Switch Mode Power Supply Transformer? Miracle Electronics - Testing smps transformers is not as easy as

The Power Supply Unit (PSU) - . function. the basic function of the psu is to convert ac line voltage into a steady dc