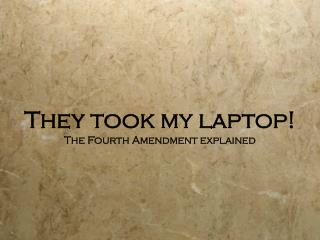 They took my laptop! The Fourth Amendment explained They took my laptop! The Fourth Amendment explained. Disclaimer. It is vitally important for you to understand that while I am an attorney, I am not your attorney. In no way, shape, or form is this presentation intended to provide you with legal advice.

They took my laptop! The Fourth Amendment explained

The Progressive Movement - . review. which amendment made it legal for the federal government to tax the incomes of

The Future of the Fourth Amendment - . david nuffer. the right of the people to be secure in their persons, houses,

Laptop Integration For Staff 07-08 School Year - . the next 7 slides will help us group everyone for today’s exercises.

WHAT WERE THE AIMS OF EACH PIECE OF LEGISLATION OR CONSTITUTIONAL AMENDMENT - . federal trade act set up federal trade

American Civics - . $200. this amendment may well be the m ost controversial in the bill of rights- it guarantees

Bill of Rights Flash Cards - . 6th amendment (right to an lawyer, legal counsel). this amendment guarantees you the right