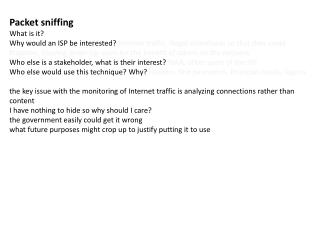 Packet sniffing What is it? Why would an ISP be interested? Internet traffic. Illegal downloads so that they avoid litigation. Slowing down big users for the benefit of others on the network Who else is a stakeholder, what is their interest? RIAA, other users of the ISP Unit 2 - Sign up for your packet at the supply center!. unit 2. building a nation. objectives . swbat sign up for their

Student Packet 2008 - Above all else, we are committed to the care and improvement of human life. in recognition of this

Review Sheet - . go through and answer all the questions on your own time. do not wait until the last minute to do this

INSTRUCTIONS: - Review for the u.s. history fall final exam. instructions: g o through the slides and answer each

Restraints - . self- learn packet revised november 2002. updated 01/07 all staff. objectives. at the conclusion of the