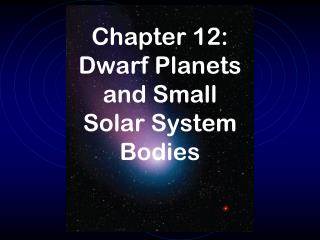 Chapter 12: Dwarf Planets and Small Solar System Bodies. Pluto: distant ice world that was once a planet. Pluto was discovered by Clyde Tombaugh in 1930.

what are Dwarf or minor planets and how did they form? - . by:jacob moneda and caleb castro. what is a dwarf planet?.

Minor Planets - . between the meteorites and the moons. dwarf planets. a celestial body orbiting the sun massive enough

Minor Bodies of the Solar System - . chapter 7. kepler’s laws. 1. planets orbit the sun in elliptical orbits with the

Dwarf Planets - . and tnos. the problem of pluto. pluto was discovered in 1930. named after the god of the dead. its

Other Stuff in the Solar System - . dwarf planets. large objects orbiting the sun that do not have enough mass to be

Chapter 12 Asteroids, Comets, and Dwarf Planets: Their Nature, Orbits, and Impacts - . 12.1 asteroids and meteorites. our

Dwarf Planets - . by lindsey. what is a dwarf planet?. it is a celestial body orbiting the sun it has it’s own gravity

Chapter 9 - Solar System Debris (Vagabonds) - . asteroids are quite small, and most have eccentric orbits in the asteroid

Minor Bodies of the Solar System - . chapter 28. satellite - a natural or artificial body that revolves around planet.

Amazelaw.com - Https://amazelaw.com/ a website system for lawyers who want their marketing to work without wasting