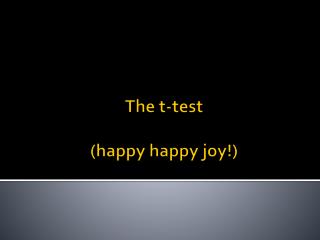 Happy Bulls, Happy Cows, Haplotypes - . what is a haplotype?. a group of alleles on a single chromosome that are closely

Happy Happy! Happy! - . everyone wants unity. but how do we get the unity we all seek? as we will see, the answer is to

Happy - Isa 42:5 ¶ thus says god the lord, who created the heavens and stretched them out, who spread forth the earth

HAPPY - . easter comenius 2014. spring. easter is in spring. there are a lot of spring flowers: daffodils, tulips and

Happy - . noisy. loud. pal. friend. glad. super synonyms!. what is a synonym?. synonyms are words that have the same

Happy Happy! Happy! - . not actually related . unity through acts 15. once upon a time there was a crisis of unity in the

Happy - . first graders used shape tools, fill, spray can and text tool to draw these pictures of themselves. mrs.

HAPPY :) - .  feeling or showing pleasure or contentment  having a sense of confidence in or satisfaction with a