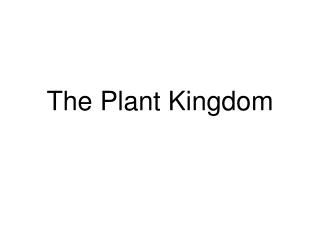 The Plant Kingdom. Key Features. Multicellular Photosynthetic Alternation of generations- All plants have a haploid-diploid life cycle in which haploid gametophytes alternate with diploid sporophytes. Haploid/Diploid. Haploid- a cell with 1 set of chromosomes. Often designated as “n”

The Kingdom Protista - . chapter 20. what is a protist?. any organism that is not a plant, an animal, a fungus, or

HYDRO ELECTRIC POWER PLANT - . introduction. the cheapest source which is to generating power is water. hydro-electric

Kingdom Protista - . protists. 50 m. even a low-power microscope can reveal an astonishing menagerie of organisms in a

The Plant Kingdom - . what is a plant?. eukaryotic multicellular most are photosynthetic autotrophs some are carnivores

Kingdom Plantae - . introduction to plants. what is a plant?. plants: are multicellular eukaryotes have cell walls made