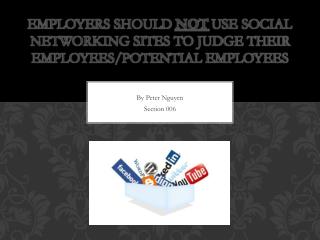 Employers should NOT use social networking sites to judge their employees/potential employees. By Peter Nguyen Section 006. Some facts about this topic. HIPAA Training Presentation for New Employees - . hipaa police. how did we get here?. goals of this session to answer the

Employees selection, recruiting &amp; interviewing skills - . program outline. introduction what is going on? what is

THE MALAYSIAN LEGAL ENVIRONMENT - . the legal environment. the employment act 1955 the children and young persons

Why Should Your Company conduct Background Checks on the employees - . employment screening is aimed at helping employers

Deceased Employees in OSPA - . may 18, 2010. class will cover:. an overview of the process, including: a basic checklist

Deceased Employees in OSPA - . may 18, 2010. class will cover:. an overview of the process, including: a basic checklist