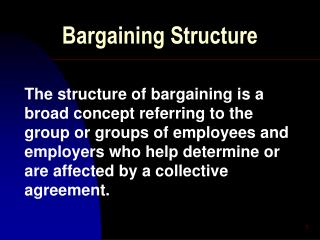 BARGAINING STRUCTURE - . which employees/facilities are covered by the agreement? two kinds of bargaining units

Bargaining - . bargaining. to express bargain how much is this? how much do you want for……? that’s a little more

Collective Bargaining - . case for change. as we have learned about the collective bargaining process, we have questions

Nuclear Bargaining - . plsc 379r lecture 3. shall we play a game?. some news. putin said about us development of a