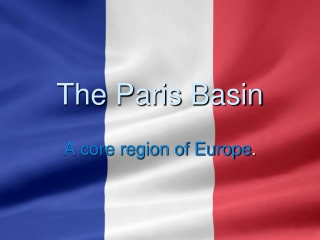 Chapter 25: The Dynamics of European Regions I: The Paris Basin - . section (2): contrasting european regions i: the

The Basin - Water policy in the mdb the basin plan - have we finally got it right? university of queensland workshop,

The Atchafalaya Basin - . jonah d. price april 6, 2005. where is the atchafalaya?. its located in southern louisiana

The Mangrove-Paris - . by dahlia and sara. location of paris. the mangrove is located in france. france located in

THE DANUBE RIVER BASIN the most international basin in the world - . 10% of europe 81 mio inhabitants 18 countries

The Jordan River Basin - . fall 2005. overview. location and history importance of the jordan basin problems in the

Settling the Great Basin - . chapter 7. this is a no gum class. please dispose of it properly!. bell activity. your word