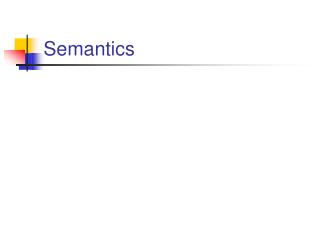 Semantics. Describing the meanings of Programs:. Programmers need to know precisely what the statements of a language do. English explanations in language manuals are often imprecise and incomplete. Semantics formalisms are needed by programmers and compiler writers. Operational Semantics.

Semantics &amp; Pragmatics - . what does this mean?. from the lowly phone through the morph , the phrase , and the

SQL: Structured Query Language - . chapter 5. r1. example instances. we will use these instances of the sailors and

Chapter 7 Semantics: The Analysis of Meaning