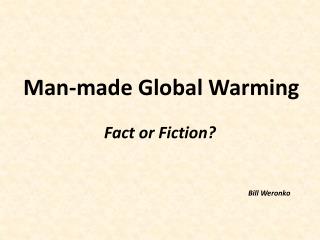 Man-made Global Warming. Fact or Fiction?. Bill Weronko. With Cap and Trade Legislation pending it is critical to determine if the underlying stated rationale is true. What cap and Trade will do:.

What is global warming about ? - . variations of the earth’s surface temperature for the past 140 years. spm 1a.

The Politics of Climate Change - . anthony giddens. the book is a prolonged enquiry into a single question: why does

Climate Change - . examining the state of climate science, the proposed solutions to global warming, and the claims of

Global Warming Lecture 4 - . the case against. caveats. as with last lecture, todays lecture is being used to present a