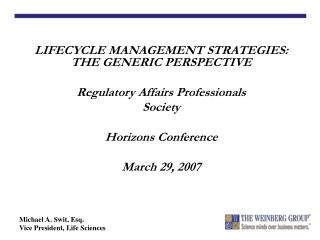 Diovan generic - Diovan (valsartan) is in a class of medications called angiotensin ii receptor antagonists. it works by

Current State of Affairs in SOA Along with Migration Strategies and Methodologies - Www.oasis-open.org. current state of

Strategy for Regulatory Safety Research - . ners-präsentation, 23. september 2004. mission of the hsk. according to the

The Role of Libraries in Modern Society: A National Perspective October 13, 2011 - . what is imls?. we are the federal

Career Advancement: from the perspective of a journal editor and conference organiser - . 19 th advanced summer school in

Strategies for the Scale-up of MC Services PEPFAR’s Perspective: Implementation for Impact - . psi/fhi satellite on

Generic Change Management: The SERF Project and Beyond - . in collaboration with students at wpi including: kajal