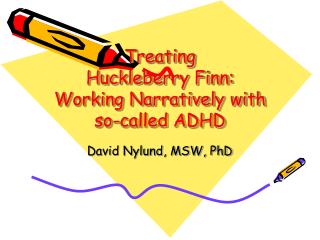 The Adventures of Huckleberry Finn - . a study guide. chapter 1. 1. what can the reader expect in a story told from

The Adventures of Huckleberry Finn - . study guide questions chapters 31-43. chapter 31. what does the king and duke’s

SURFACE FINISHINGS - . the art of treating the surface of building materials with a suitable covering material to make

Satire In The Adventures Of Huckleberry Finn - . caricature. a caricature is an extreme exaggeration of a character,

Why Don’t We Do a Better Job of Treating Pain ? - . bryan e. bledsoe, do, facep midlothian, tx. introduction. many, if

Brain Chemistry and Medication in ADHD - Maurice.place@northumbria.ac.uk. disclosure member of the speakers panel of