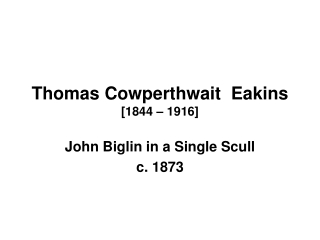 Thomas Cowperthwait Eakins [1844 – 1916]. John Biglin in a Single Scull c. 1873. Thomas Eakins. Thomas Eakins was one of many Americans who invaded Paris during the latter part of the nineteenth century (1800’s) to complete their artistic education. Henri Rousseau 1844-1910 - . a study of what it means to be an artist presented by lucy mchugh and jolene walker. spring

1916 RISING - . friday by ciara and claire. the morning. at the gpo, pearse ordered the cumann na mban women out of the

Turning Points of the Western Front 1916 Battle of Verdun Battle of the Somme - . the battle of verdun was fought between

The Keating-Owen Act of 1916 - . the first bill introduced to regulate (restrict) child labor, passed by congress and

Dominican Republic - . by jalen mcdonald. history of the country. during the first decade of independence, haiti mounted

The telegraph was invented by Samuel Morse in 1844. - Objective: to examine the growth in mid-19 century technology and