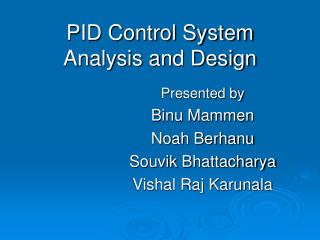 System Analysis &amp; Design - . lesson 06 traditional design techniques. in this lesson we will describe the steps

Robust control - . saba rezvanian. fall-winter 88. robust control. a control system is robust if it is insensitive to

Chapter 6 System Design: Decomposing the System - . where are we?. we have covered testing (ch 11), chapter on object