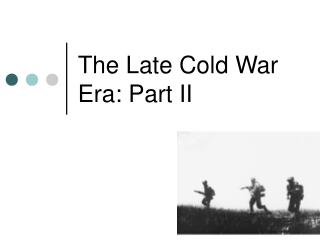 Cold War Part II - . the arms race. the race begins…. both countries began developing their weapons so as to be able to

World War II Results/Birth of the Cold War - . - the end of wwii found soviet forces occupying most of eastern and

The Cold War Part II - . including ms. rohweller’s report on the background, conflict and relationship of the vietnam

Chapter 12 – Birth of the Cold War Era - . #1 the cold war. essential question : what led to the cold war between the

The End of the Cold War - . chapter 18, section 5. the ussr declines. fears that ussr would dominate did not come true

Chapter 27: Cold War / Postwar Changes - . rivalry in europe. the us and the soviet union disagreed over how eastern

The Cold War Era - . sputnik and beyond. the cold war. threat of the spread of communism led to policy of containment us

The Cold War Part II - . including ms. rohweller’s report on the background, conflict and relationship of the vietnam