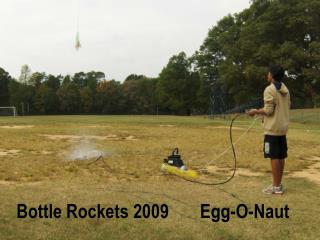 Bottle Rockets 2009 Egg-O-Naut. EVENT DESCRIPTION(200 9): B & C-event Prior to the tournament teams will construct rockets designed to carry an Egg-O-Naut (a raw Grade A large chicken egg), stay aloft the greatest amount of time, and return to earth without breaking the egg.

Tournament Attire - . men’s attire. hair must be a natural human color and be neatly groomed so as not to distract from