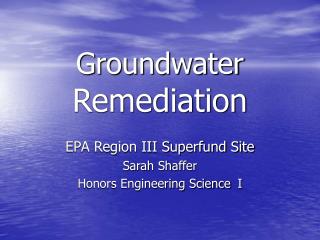 Groundwater Remediation Services - The contamination of groundwater can be removed by using various techniques. our

REMEDIATION - Introduction to project 3. remediation. what is remediation?. the process of taking a text and translating

Remediation: - . the representation of one medium in another is remediation. it is a defining characteristic of the

Groundwater - . what is it and why is it important?. click on any number for an explanation. adapted from: “groundwater

Groundwater - . 6 th. groundwater. what if you dump a bucket of water on the ground what will happen? depends on the