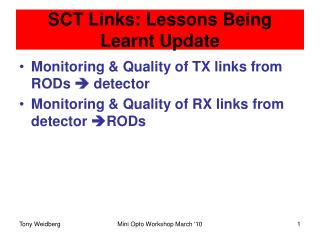 How I Got There? Lessons Learnt Benefits of Complex Research - The ethical, legal &amp; technological considerations

PCeHR Lessons Learnt and the Future of E-Health - . presenter: dr greg wyatt. welcome. this presentation is based on

Delivering Work Within Possession Lessons Learnt - . nlrip – lessons learned. qsra. not just used as a tick in the box