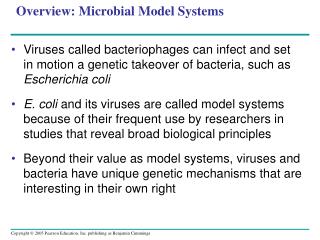 Overview: Microbial Model Systems. Viruses called bacteriophages can infect and set in motion a genetic takeover of bacteria, such as Escherichia coli

A preliminary survey of viruses of bats of Canada - . (identification of viruses that might emerge as human pathogens).

Introduction to Microbiology - . i . overview. microorganisms are everywhere associate with other multicellular organisms

Microbial Systems: The human microbiome and Probiotics - . systems theory. from reductionism to synthesis : leaps in