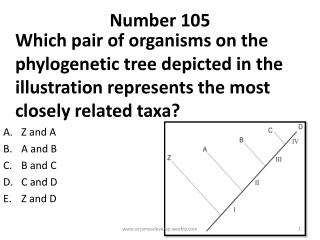 Number 105. Which pair of organisms on the phylogenetic tree depicted in the illustration represents the most closely related taxa ? Z and A A and B B and C C and D Z and D. Answer.

Lucky Number 11 - . number 11. math-special number project: rasmus. i chose number 11 because…. it is my lucky number

Atomic Number - . the atomic number is equal to the number of protons in the nucleus. sometimes given the symbol z. on

I Spy a Number - . m3n1. students will further develop their understanding of whole numbers and decimals and ways of

The Number Zero - . introduction: in this unit i have learnt many things about the number zero. i learn’t where the

Top 10 Reasons Why It’s Great to be Back in School - . created by: mrs. merrimac’s awesome fourth graders. number

Algebra 1-A - . a journey through time. number sets. a number that when squared gives a positive number. real numbers

EMM111 Maths And Numeracy Assignment 2: Investigation Seminars. - What are happy numbers?. a happy number is when you

BIO 105 - . meiosis. overview of meiosis. consists of 2 rounds of division unlike mitosis in which there is only one