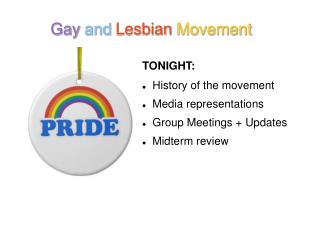 TONIGHT: History of the movement Media representations Group Meetings + Updates Midterm review. Gay and Lesbian Movement. Origins of the Movement. Emerged with the 1960s protest cycle Origins go back further, esp. thanks to opportunities during World War II: in the armed forces