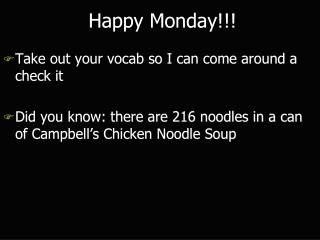 Happy Monday!!!. Take out your vocab so I can come around a check it Did you know: there are 216 noodles in a can of Campbell’s Chicken Noodle Soup. Can you identify these 1920s slang word? 1. Applesauce 6. Flat tire 2. Big cheese 7. Lounge Lizard 3. Bee’s knees 8. Sheba Happy Monday! - Extra credit supplies due 9/2. happy monday!. 1. fill in your planner. 2. you will need a piece of blank

Happy Monday!!!  - . pick up your card from the front table...you have ten minutes to complete and turn back into the

Happy Monday! - . journal. take out your binders and look at the “processing puritan era and age of reason” handout

Happy Monday - . we gone go over yo world war i testesses. the 1920s. the rise of modernism and mass culture. remember

Happy Monday - . today is monday. yesterday was sunday. tomorrow is tuesday. monday’s sound. today’s sound is made by

Happy Monday! - . co : i will understand and identify the structure and function of a carbohydrate. lo : i will write

Happy Monday - . sign up sheet notes. thanks for showing up when some team didn’t last night. taking care of yourself.

Happy Monday! - . motivation monday :). a people of prayer. chapter 4: what is prayer?. words to

Happy Monday! - . bellwork :. turn to your partner and talk about the following questions: what biomolecule contains the

Happy Monday  - . do before the bell rings: pick up the papers from the front table. have your homework out on your