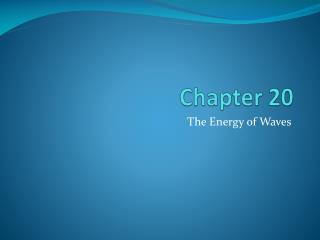 Chapter 20. The Energy of Waves. Section 1: The Nature of Waves. Student objectives Describe how waves transfer energy without transferring matter. Distinguish between waves that require a medium and waves that do not. Explain the difference between transverse and longitudinal waves.