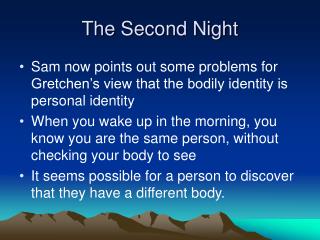 The Second Night. Sam now points out some problems for Gretchen’s view that the bodily identity is personal identity When you wake up in the morning, you know you are the same person, without checking your body to see It seems possible for a person to discover that they have a different body. Curriculum Night Second Grade Mrs. Elia - . where can i see what my kids will be learning?. www.fsd157c.org district