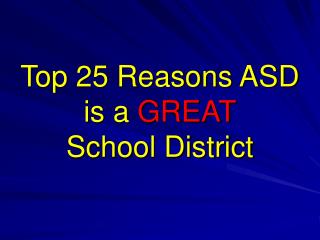 Top 25 Reasons ASD is a GREAT School District. ONE . Aberdeen School District has a proud history, yet continues to be known throughout South Dakota and beyond for a student-centered philosophy, innovative programs, and the exemplary education it provides. TWO .

Barrington Community Unit School District 220 - . discussion for the board to create standards. 7/26/09. standards: the

San Diego Unified School District High School Survey - . among students who rode a bicycle during the past 12 months, the