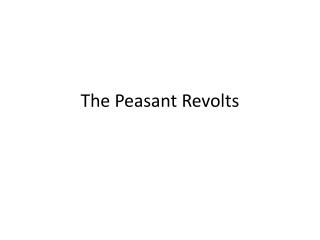 The Peasant Problem - . peasants were the biggest benefactor of the revolution  land reform; had little interest in

The Medieval Peasant - . this presentation covers: peasant homes and work controlling the peasants women. 1 of 16.

Libya Revolts - . libya is located in the northern portion of africa along the coastline on the gulf of sidra. they share

Slave Revolts - Ralph waldo emerson. slave revolts. &quot;what is man born for but to be ... a remaker of what man

Peasant Wedding - . by: william c arlos williams. activity:. 1. when you see this picture what is the first thing you

Peasant Dress - Appropriate for both ladies and girls, a peasant outfit will definitely be usually free of cost moving as

Revolts Against the Metternich System - . through the use of force, the quadruple alliance successfully suppressed most

The History of Peasant Women - . anderson pp. 87-118 the life the year’s activities children and nutrition threats to

The Arab revolts of 2011 - . context they didn’t come out of nowhere, but timing and locations were a surprise modest

CAUSES OF FILIPINO REVOLTS - . desire to regain the lost freedom of their ancestors (political) religious intolerance