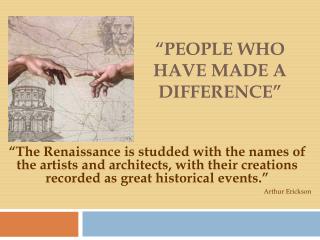 “People Who Have Made A Difference”. “The Renaissance is studded with the names of the artists and architects, with their creations recorded as great historical events.” Arthur Erickson . Essential Understanding: Giving - A look around the globe at people in need and the help that many have given to try to make their lives better.

Sketches made by Dr. Jose P. Rizal - . sketches with no known dates as to when sketched. sketch of himself - made in the

Bank Reconciliation Statement - . the purpose of the bank reconciliation statement. due to the timing difference,

Sculptures made by Dr. Jose P. Rizal - . sculptures with no known dates as to when made. orate frantes (let us pray

HW TO MANAGE CHANGE EFFECTIVELY - . by t.m.jayasekera . what happens when technical changes are made . can people mange

Management of People - . perception study. every judgement made by an individual is conditioned by his personality type

Chapter 3 - . data storage. learning outcomes. by the end of this chapter you will know: the difference between

MultiChat 15 - . vocabulary file for the chatpc silk and alt-chat . main (home) page. questions page (this page is set to

Success! The Australian National Suicide Prevention Strategy has worked… But what exactly made the difference?

Touching People for Christ in Your Own Backyard . . . - How to make a difference in your community!. touching people for

What’s the difference between sympathy and empathy ? - . sympathy…. …is when you understand how and why a person

How has National Board Certification made a difference in your life? - National board renewal prepared by louisa jane r.