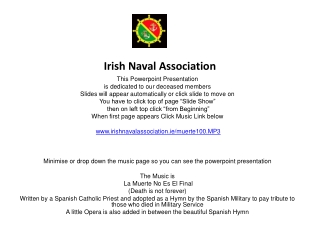 Irish Naval Association. This Powerpoint Presentation is dedicated to our deceased members Slides will appear automatically or click slide to move on You have to click top of page “Slide Show” then on left top click “from Beginning” When first page appears Click Music Link below