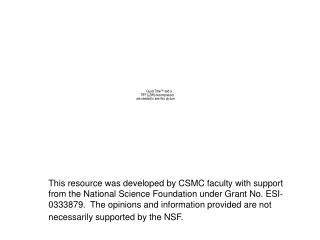 Committees and Reports that have Influenced the Changing Mathematics Curriculum

This resource was developed by CSMC faculty with support from the National Science Foundation under Grant No. ESI-0333879. The opinions and information provided are not necessarily supported by the NSF. Committees and Reports that have Influenced the Changing Mathematics Curriculum.

Committees and Reports that have Influenced the Changing Mathematics Curriculum

DSS33 Transfer to National Science Foundation/ Aricebo Observatory - . prepared by: t ross - june 2008 thanks to: a

Chapter 5 - . socialization. chapter outline. becoming a social being nature and nurture the social construction of the

Learning Objectives - Chapter 2 the risk of fraud and mechanisms to address fraud: regulation, corporate governance, and

Educational Development and the NSS - . seda/he academy workshop. aims of this session. to consider the context required

SOL Review - Biology…. the study of life. sol review. what do you remember?. 8 characteristics of life. c – c ell