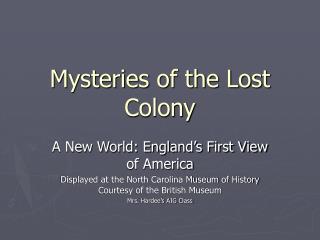 Mysteries of the Lost Colony

Mysteries of the Lost Colony. A New World: England’s First View of America Displayed at the North Carolina Museum of History Courtesy of the British Museum Mrs. Hardee’s AIG Class. A Bit of Background…. http://www.youtube.com/watch?v=4XxNgGljaGE

Mysteries of the Lost Colony