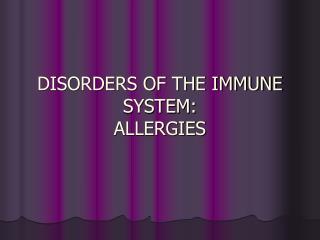 DISORDERS OF THE IMMUNE SYSTEM: ALLERGIES

DISORDERS OF THE IMMUNE SYSTEM: ALLERGIES Your Immune System The organs involved with the immune system are the lymphoid organs, which affect growth, development, and the release of lymphocytes.

DISORDERS OF THE IMMUNE SYSTEM: ALLERGIES

Vaccines, Allergies and HIV/AIDS - Warm-up 5/20: why are the white blood cells called t-cell &amp; b-cells? which

Immune System Disorders - . aims: must be able to state the main types of immune system disorders. should be able to

Allergy and Allergic Diseases - . incidence steadily rising trebling in the last 20 years 1/ /3 of the population will

Allergies - . allergies and allergens. allergies- abnormal reactions of the immune system that occur in response to

ALLERGIES - . what does an allergy mean? an allergy refers to an exaggerated reaction by our immune system in response to

AIM: What are allergies? - . when a pathogen enter your body, your white blood cells make antibodies that match the shape

Disorders of the Immune System - . chapter 19. immune response. definition the collective, coordinated response of the