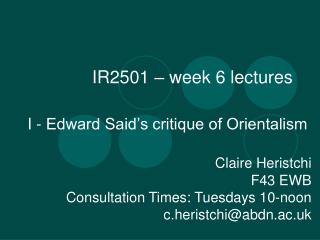 IPRA International Public Relations Association - an introduction - . who are we?. the world’s premier association for

International Relations Theory - . realism; pluralism; globalism and beyond. international relations. it is a discipline

International Theory: The Second Debate Realism versus Behavioralism - . or, to be more precise: traditionalism versus

Responding to Liberalism - . the way of life can be free and beautiful. but we have lost the way. greed has poisoned

SO 4518: Femininity and Masculinity - Lecture outline. general overview of the coursehow different are women and men?.