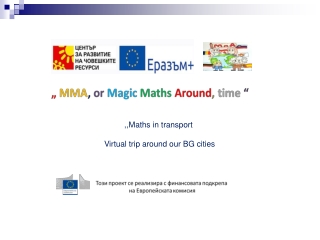 ,,Maths in transport Virtual trip around our BG cities

,,Maths in transport Virtual trip around our BG cities. Hello! Today we will see some landmarks in Bulgaria. The cities we will visit are the following:. 1.Sofia-capital 2.Lovech 3. Pleven 4. Veliko Tarnovo 5.Gabrovo 6.Sliven 7.Burgas 8. Varna 9.Dobrich 10. Silistra. let's start.

,,Maths in transport Virtual trip around our BG cities