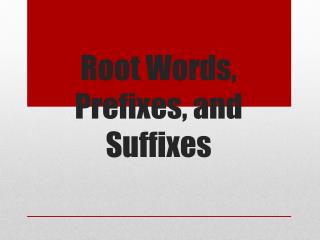 Root Words, Prefixes, and Suffixes. Words are broken into parts. Prefixes are at the beginning of words Suffixes are at the end of words A root is a set of letters that have meaning. It is the most basic form A root can be at the front, middle or end of a word. The Word.

WORD SCRAMBLE - . while we’re all getting settled, let’s have a little fun! how many of these topic related words can

PREFIXES and SUFFIXES - 0. prefixes and suffixes. and understanding our roots. 0.

Prefixes, Suffixes, and Root Words often used in Biology - . not/without. abiotic or anaerobic. a- or an-. two. dioxide.