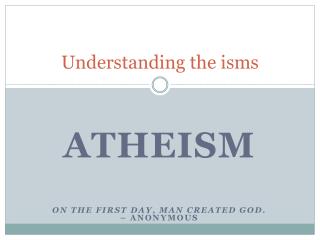 Understanding the isms. Atheism On the first day, man created God. – Anonymous. Do Now. What do you think ‘atheism’ is? What have you heard about atheists? Do you think atheism is a positive or negative thing?. What is atheism?. Gallery Walk - . examples of “the isms”. gallery walk directions. start at the exhibit number that is the same as

World War I - . from neutrality to war. what caused wwi?. overview the “-isms” the great family feud alliances and