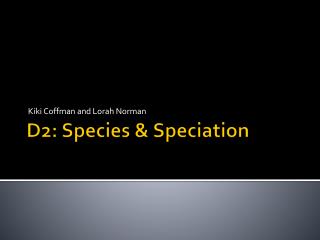 Speciation: the origin of species How many species? Number described: 1.5 – 1.6 million - Number estimated: 5-6

SPECIES &amp; SPECIATION - . (a) in your own words define what is the species? (b) what is speciation?. species

Speciation questions - . easy one; ncea 2008. there are two species of howea palm on lord howe island. they evolved

Speciation - . chapter 25. speciation. speciation: the creation of new species. may occur in a population due to: reduced

Ch. 6-1 Effects of Evolution on Species - . eq: what are the 2 main types of evolution and what evidence is used to

Modes of Speciation - . modes of speciation. there are different modes that can lead to the formation of new species:

Speciation - . species a population that interbreeds and does not breed with other populations even when there is

16.3 - . the process of speciation. recall that biologists define a species as a group of organisms that breed with one

Speciation &amp; Patterns of Evolution - . *. objectives. explain how the isolation (physical or genetic) of

Ch. 27.4- Speciation - . target #36- i can define species. species: defined as a group of subpopulations that are capable

Climate Change and Speciation - . how species respond to changes in climate and how news species from. migration.

Speciation - . speciation: splitting of one species into 2 different species. what is a species? based on ability to

CHAPTER 14 The Origin of Species - . the origin of new species is called speciation. what is a species?. similarities