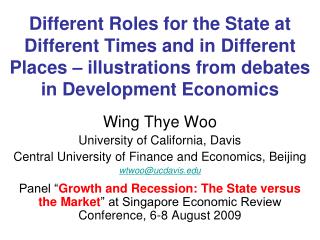 Different Roles for the State at Different Times and in Different Places – illustrations from debates in Development Economics. Wing Thye Woo University of California, Davis Central University of Finance and Economics, Beijing wtwoo@ucdavis.edu

It Takes a Team to Fight a Disaster! - . !. have you spent your life entire looking for that pot of gold at the end of