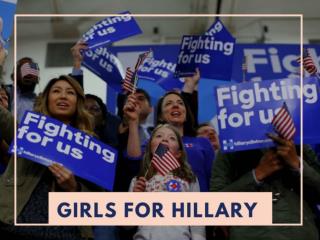 Girls in the audience at Hillary Clinton's rallies. Where Do They Stand On The Issues? - . hillary clinton v. barack obama. presented by the democratic law organization

Hillary Putnam - . whichever way you cut it, meanings ain ’ t in the head. twin earth thought experiments. for a

Reaching the Girls Left Behind: Investing in Adolescent Girls in Liberia - What little policy attention and investment

Girls and Maths - . tom garner. aims of session:. to help you identify girls who will potentially underachieve from your

Changing the culture - . because girls deserve a better world. mission : to create opportunities, develop programs and

Hillary class is the best class in the world - . my teacher is helpful and kind. teacher s. mrs hefferon mrs carrot mrs

Are Girls Too Mean To Each Other - . reasons girls are mean to each other…. home/family problems. impress opposite sex.