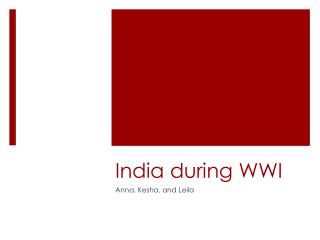 India during WWI. Anna, Kesha, and Leila. Background. In 1914, India was in a state of growing political unrest Germans had been trying to stir up anti-British movements in India Any conflict GB was involved in would lead to Indian rebellion Powerful Empires of India - . focus question  in what ways did maurya and gupta rulers achieve peace and order for

INDIA’S FUTURE - . r b roy choudhury memorial lecture mumbai. 29 january 2007. even though the world has just

Politics of India - . india. republic of india. a federal republic with a parliamentary system of government capital: new

India - . by emreen bharara. india. india is the largest country in asia. history. india had earned freedom from the